Roots of a City

During the Second World War, the Germans took aerial photographs of areas through which the front was passing.

Such photographs allowed them, among other things, to draw detailed maps and plan military operations. The German intelligence was responsible for those actions.

Cities were photographed by the Germans during hundreds of flights. Warsaw was documented in this way many times. The photos show the Polish capital before the Uprising, during the fighting, and the completely destroyed city after the fights ended. The frames from successive flights show how the city had changed.

After crossing the boundaries of the area of interest, the aircraft would turn back to the adjacent flight line and the action was repeated. Although created for military purposes, those photographs today are a unique historical and educational resource. They comprehensively show the Polish capital before the Uprising and the process of its destruction.

The German aerial documentation was technically and organisationally outstanding. By the end of the fighting, it became clear how important those photographs would be for establishing superiority in the post-war world.

The Allied armies and the Red Army were engaged in a race not only to Berlin but also to take over the enemy’s collection of documents. The Americans and the British had to find the widest possible stock of aerial photographs before they fell into the hands of the USSR and potentially threatened the security of Europe.

Dick Tracy, Orwell, Tenant. These are the codenames of some of the collections of photographs found. In total, more than 1 million 200 thousand images were inventoried over a period of 4 years. The importance of those materials declined only in the 1960s, with the coming of a new generation of spy planes and satellites. Copies of the films were sent to the US and UK, from where the Warsaw Rising Museum managed to obtain them.

The number of German aerial photographs acquired by the Western Allies during the last period of World War II.

That's how many years it took for the photo inventory to take place at RAF Medmenham base.

The Eagle's Nest in Bavaria

A site where many sought-after aerial photographs were found.

The codename given to the entire collection of photographs.

One of the most unusual models of German aircraft used for reconnaissance.

For at least as many years, German photographs were the best source for Americans to map Eastern Europe.

Number of photographs acquired by the Warsaw Rising Museum.

The photographs were developed as layers of a map of the city in specialised GIS software. They trace the events of September 1939, the Ghetto Uprising and the Warsaw Uprising, and the scale of the destruction wrought by the Germans before the Red Army entered the city.

The first research topic was identified by the insurgents themselves. Witnesses to those events are trees – often monuments of nature – which still function in the space of Warsaw today. Inspired by this line of research, we present them to you supplemented with additional source materials from the Ministry of the Interior and contemporary photographs.

Aerial photographs contain a range of information. Both those that come to the fore, such as the layout of streets and buildings, and small details, such as the position of vehicles and barricades. Each group of elements constitutes a separate layer of the city's history from the time of the Uprising, but also the understanding of how pre-war Warsaw looked like and functioned.

Getting to know the photos accurately is such a challenge that help is needed to find and complete the many stories that still remain undiscovered. We would like to invite you to explore those mysteries.

The first research topic was identified by the insurgents themselves. Witnesses to those events are trees – often monuments of nature – which still function in the space of Warsaw today. Inspired by this line of research, we present them to you supplemented with additional source materials from the Ministry of the Interior and contemporary photographs. 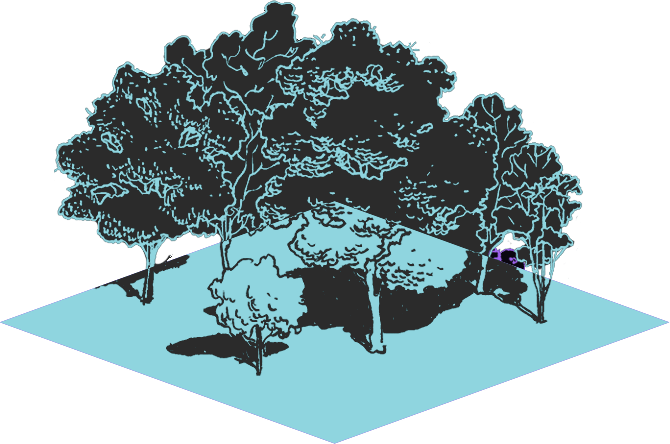 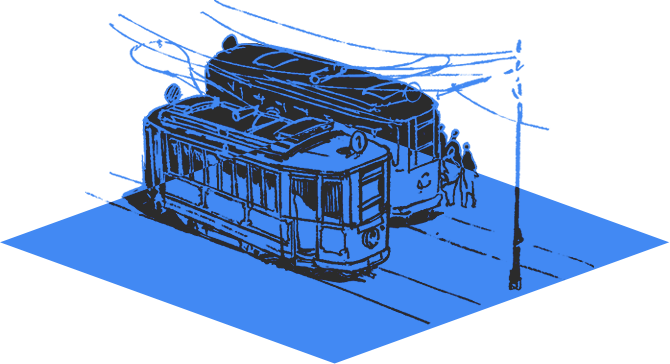 The insurgents never captured Saski Garden. The Germans had fortified positions there, and the garrison consisted largely of young soldiers.

During one of the ceasefires, an unusual conversation occurred in his area. It was about a container dropped from a plane by the British. Its parachute got caught in a tree growing in the Park, but the tray was hovering over Krolewska Street – the area occupied by the insurgents.

The Germans persuaded to fight together against the Russians, the Poles wanted free access to the container. As it later turned out, it only contained practically useless ammunition.

In the then first line of trees from today’s Piłsudski Square stood the now monumental white chestnut tree. The sad epilogue of the Rising was yet to come. Nearly a quarter after the capitulation of Warsaw, loud explosions rang out in the completely deserted city. It was the Germans who blew up the Saski Palace.

A few days after the outbreak of the Uprising, Hitler ordered the mass murder of civilians to break the resistance of the people of Warsaw. Residents of Wola were killed in their homes and in the streets, witnessed, among others, by Korczak’s Oak.

Whole families were killed by bullets, including women, children and the elderly, as well as patients and hospital staff. Despite unprecedented brutality, especially at the hands of the Dirlewanger Brigades and the RONA, the insurgents did not give in.

The area of Traugutta Street was a battlefield for more than half of the Uprising. Particularly bloody events took place on 4 August, when the Germans, rushing civilians as live shields before tanks, unsuccessfully tried to occupy the barricade at the corner of Czackiego Street.

On 23 August, the insurgents successfully attacked, among others, the Holy Cross Church, as the area was shot by snipers from the church tower. The very next day, German counterattacks began. They culminated in the occupation of burnt-out buildings in the area on 8 September. A few trees have survived among them.

At the back of the Zamoyski Palace at Foksal Street, there is still a garden on the Vistula escarpment. In August ’44, insurgent hospitals were located in Pierackiego Street (as the street was then called). During the withdrawal of the Polish troops, the Germans fired at them mortar shells with inflammable chemicals.

The wounded staying in the hospitals were burning alive. The sisters threw mattresses onto the pavement so that the wounded could try to escape by jumping from windows. Only a few survived.

On the eastern bank of the Vistula, Soviet troops were already stationed in the second half of September. A month earlier, one of the Liberators delivering containers with weapons and supplies to the insurgents crashed on the shore of Kamionkowskie Lake.

The discharges took place after sunset. To avoid searchlights looking for aircraft silhouettes, some pilots chose to fly very low. This in turn created the risk of even an accidental hit from an anti-air weapon. During the night of 13-14 August, the engine of one of the machines started to burn.

Probably looking for a place to make an emergency landing, the Liberator headed towards Kamionkowskie Lake. The plane crashed on its shore.

Today, there is a boulder with a plaque commemorating this event. Among those who attended its unveiling was the only airman to survive the crash – Sergeant H.L. Lyne.

Check out the full catalogue of aerial photographs of Warsaw prepared by Museum’s specialists. Looking through the photographs, you are bound to come across interesting objects whose stories are worth digging into. Write about what else we should talk about and why. Together we’ll choose subsequent research topics – layers of our city’s roots.